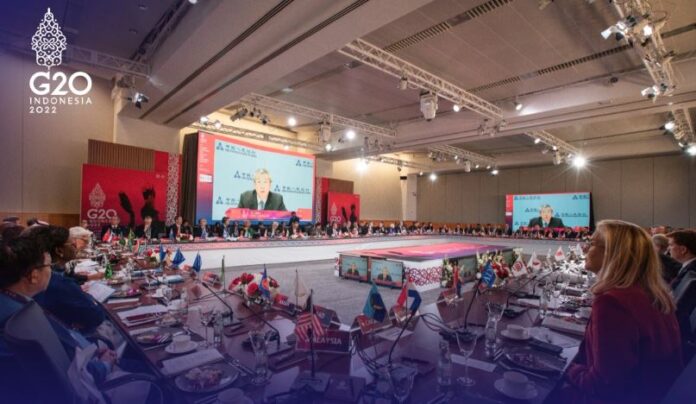 The joint statement of leader of the G20, which will be released at the end of the current annual summit a Baliin Indonesia, will urge the peaceful resolution of conflicts and explicitly condemn the use of atomic weapons. The newspaper "Nikkei" anticipates it, which has seen a draft of the document. The text of the declaration reflects the international community's growing concern about the conflict in Ukraine: the G20 leaders will affirm that "the use or threat of use of nuclear weapons is inadmissible", and that "the peaceful resolution of conflicts, efforts to deal with crises, diplomacy and dialogue are vital. This must not be an era marked by wars”.

The text of the Declaration, which will be formally adopted by the G20 leaders tomorrow, could still undergo some changes. It also states that "the majority of members strongly condemn the war in Ukraine, which has caused an immense cost of human suffering and has exacerbated existing fragilities of the world economy, limiting growth, increasing inflation, damaging supply chains and increasing energy and food insecurity”. The draft joint statement refers to "war in Ukraine", but avoids the formula "Russian war in Ukraine": a compromise aimed at ensuring that the document gets the maximum possible support among the leaders meeting in Bali.

Indonesian President Joko Widodo urged world leaders to "end the conflict" in Ukraine and avert a new Cold War during his keynote address at the annual G20 summit in Bali. “Being responsible here does not mean creating zero-sum situations, it means that we must end the war. If the war doesn't end, it will be difficult for the world to move forward,” the Indonesian head of state said during the inaugural session of the summit. In the past few hours, US and European officials have promoted the publication of a joint statement by G20 leaders that openly condemn Russia for its invasion of Ukraine, and exhibit Moscow's growing isolation internationally. Indonesia, which holds the rotating presidency of the Group, has however maintained the position of neutrality that has characterized it in recent months. Today Widodo avoided expressly mentioning Russia, and instead urged the leaders meeting in Bali to prevent the major powers of the globe from becoming protagonists of a new Cold War: "We shouldn't divide the world into isolated parts. We must not allow the world to slide into a new rush war,” the president said.

Indonesia: A $2,7 billion construction project kicks off this year in the new capital

The Indonesian government will ban bauxite exports starting in 2023

Indonesia: suicide bombing against a police station, at least one victim

Case Cospito, Meloni: "There is no need for the resignations of Delmastro and Donzelli"

The head of the Penitentiary Administration Department, Giovanni Russo, was heard in recent days as a person informed of the facts

Italy-United Kingdom: the visit of three British ministers aims to give new impetus to bilateral relations

Taiwan has tested a missile capable of hitting mainland China

The As Roma stadium will be inaugurated in 2027, an investment of over 528 million by the Friedkin family

The funds that the yellow and red club will allocate to the project are divided as follows: 488,4 million euros for the stadium and ancillary works, 40 million in concession fees

Minister Crosetto: "Italy will continue to support the populations of Turkey and Syria"