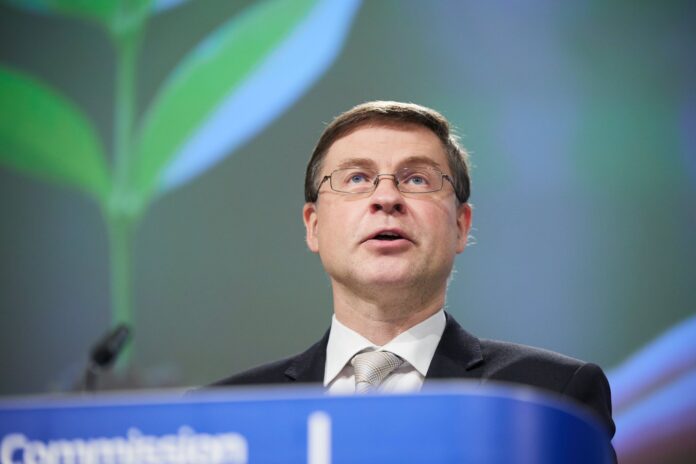 THEEuropean Union is ready to "do its part" for theUkraine, placing itself as the first donor who guarantees "how much funds" the country can expect and with what timing. This is what emerged from the statements of the vice president of the EU Commission, Valdis Dombrovskis, and the Budget Commissioner Johannes Hahn in a press conference convened today in Brussels to explain the European regular financial support plan to Ukraine. As specified by Dombrovskis, the Commission has developed a plan worth 18 billion euros in subsidized loans, to be disbursed in 2023. The conditions, he added, include, among other things, a grace period of 10 years and a maximum maturity which should reach up to 35 years. The costs of the interest accrued will be covered by the states of the European Union. "This marks a real turning point compared to the classic EU macro-financial assistance," said the Commission Vice-President. The support, he further specified, will be used "to pay wages and pensions" and to restore the fundamental infrastructures destroyed by the Russian attacks. The plan will require an operation to modify the European budget, with the aim of covering Ukraine's short-term financial needs. "We hope to reach the first disbursement in January," concluded Dombrovskis.

According to Budget Commissioner Hahn, Ukraine is in "an unprecedented situation" and European aid therefore includes a series of innovations compared to the system used so far by Brussels. One of the main changes, Hahn said, is that the guarantee for the loans designed for Kiev would be provided by the European budget room for maneuver. "The possibility of using the room for maneuver will be limited geographically, that is to Ukraine, and temporally," the budget commissioner specified. Hahn added that the room for maneuver in the EU budget will not fall on the percentage of national debt of the member states. The cost of interest issues will instead have an impact on the Member States' budgets, but only from 2024. The loans will follow a diversified strategy, giving flexibility to be able to organize targeted loans according to needs. The plan will have to be approved by the Member States unanimously as it foresees changes to the budget. The proposal has already met with the opposition of Hungary in recent days. Foreign Minister Peter Szijjarto said Hungary has supported Kiev on a bilateral basis and will continue to do so, but Budapest, he added, is opposed to any agreement involving co-financing with other EU member states.

Today came the reply from the vice president of the European Commission, who at the press conference stressed the need to provide "stable and predictable" financing to Ukraine in the next period. "There is a clear signal from Ukraine, they expect more stable and predictable funding than this year," Dombrovskis said. “For next year, funding must be more stable and predictable, not only from the EU but also from other international donors. Our proposal will provide this stability far more than in any bilateral form, ”Dombrovskis said. “We are trying to finalize the process (for the approval and implementation of the plan) by the end of the year, the Czech presidency supports us a lot. Important decisions will be taken on the matter at the Ecofin on 6 December ”, concluded the president of the EU Commission. The need in one year to cover the interest rates of the EU support plan for Ukraine could be around 600 million euros in total for the member states. “It is something doable,” Commissioner Hahn noted.

“There will be a need for liquidity already in January and for this reason the legal changes must be adopted quickly. We need the member countries to give their assent ”, the commissioner said again. “With this proposal we are the first international donor to give Ukraine some sort of guarantee as to how much funds it can expect. If we split these (18) billion (included in the plan), that's 1,5 per month. We already want to deliver something in January. Our idea is to provide 4,5 billion in advance on a quarterly basis to always give Ukraine some liquidity, ”explained Hahn. According to the vice president of the European Commission Dombrovskis "these 18 billion will be part of the necessary funding" in Ukraine next year. “Our estimate is that 3,5 billion will be needed each month. We as the EU would guarantee 1,5 billion a year and the rest would be guaranteed by other international donors. Ukraine needs these resources, or rather more than 18 billion, this is only the slice of the EU. But there are other donors, such as the G7, the International Monetary Fund (IMF), the World Bank, ”Dombrovskis said.

The Ukrainian government: "6500 Russians tried to surrender by calling our call center"

Not only Leopard and Abrams, the other tanks for Ukraine

The head of the Ukrainian presidential office to the G7 representatives: We are grateful for these historic decisions

Blinken: "Iran has rejected the current proposal to return to the nuclear deal"

The hypothesis of the Israeli newspaper "Yedioth Ahronoth": the military site hit is used by Tehran to develop hypersonic missiles in collaboration with Russia

Palazzo Chigi on anarchist violence: "The state does not come to terms with those who threaten"

"Actions of violence will not intimidate institutions"

Meloni: "I'm optimistic that Italy will make it"

"The government is trying hard, will continue to try hard, with small necessary initiatives and with large fundamental scenarios, working on both levels with determination and dedication"

"We are not at war with Russia, we have nothing against the Russian people, and there will be no Italian tanks in Ukraine"

The attack was also commented by the spokesman of the Ukrainian Air Force, Yuriy Ignat: perhaps now the Iranians "will not help Russia to commit crimes"

Pope Francis: "In the Holy Land dialogue and peace should be sought"

Building regulations were lacking and could be exploited by developers in an unsafe way, admitted UK Housing Minister Michael Gove

Bonaccini: "I want a reformist Pd, which puts work at the center again"

The candidate for the dem secretariat speaks during the programmatic convention in Milan: "As an opposition, we will say all the nos that are needed"