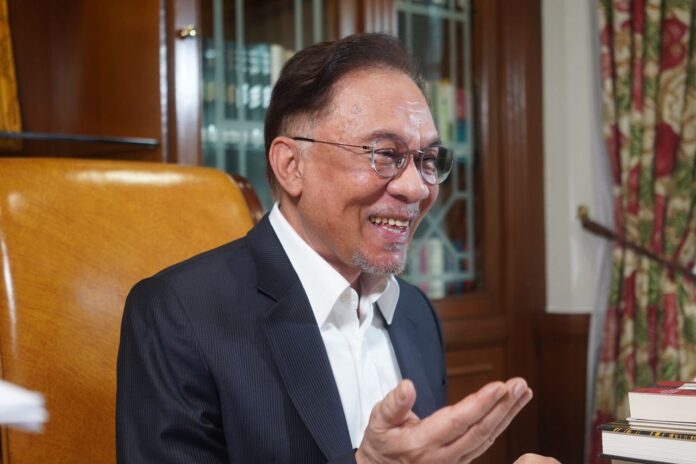 Anwar Ibrahim, 75, was sworn in today as prime minister of Malaysia after having tried for almost thirty years to get to the leadership of the government without ever succeeding. Above all, the reformist leader is the first to reach the top of an Islamic country after being accused of homosexual relations, suffering two sentences for this. Anwar has in fact been convicted twice for sodomy, which in Malaysia is a crime punishable by up to 20 years' imprisonment.

The first time happened in 1998, when Anwar was deputy to Prime Minister Mahathir Mohamad and rising star of the United Malays National Organization (UMNO), the party that had dominated the country's political life since independence. On the eve of the general meeting of the party, a booklet entitled "50 reasons why Anwar cannot become prime minister" is circulated: inside there are photographic evidence of an alleged relationship of the politician with the editor of his speeches, Munawar Anees, with his adoptive brother, Sukma Darmawan Sasita Atmadja, and with two secretaries, Ezam Mohamad and Mohamad Azmin Ali. The first two, questioned by the police, initially confirmed that they had practiced "unnatural sex" with Anwar, only to subsequently retract. The then deputy prime minister was in any case fired by the government on 2 September 1998 and the day after he was expelled from Umno.

In court Anwar, married and father of six children, professes to be "innocent" and, showing a photograph that immortalizes him with a black eye, denounces having been beaten by the inspector general of police Rahim Noor. The head of government, Mahathir, claims that Anwar "inflicted" the hematoma on himself by "pressing a glass on his eye". Subsequently, however, the charges against the police officer are confirmed and Rahim Noor is sentenced to two months in prison. Anwar, however, is also found guilty: the key element of the trial is the analysis of the DNA on a mattress which, according to the indictment, was stained by the politician's seminal fluid. The current prime minister, already convicted the year before of corruption, was sentenced to nine years in prison in 2000, but four years later the Federal Court annulled the sentence, on the validity of which many international organizations also expressed doubts.

The second case dates back to 2008. In June of that year, an associate of Anwar, 24-year-old Mohammad Saiful Bukhari Azlan, reported to the police that he had been subjected to sexual assault by his boss, 61 years old at the time, only to correct the shot and report to have had a consensual relationship. Anwar, in turn, sues Saiful for defamation, calling the allegations against him politically motivated. The Malaysian police arrest Anwar the following 16 July. In 2012, after a two-year trial, the politician was cleared of the sodomy charge due to the "unreliability" of the evidence presented during the trial. A ruling, however, which was reversed by the Court of Appeal in 2014, as Anwar prepares to become Chief Minister of Selangor State. This time the sentence is five years in prison, but the Malaysian leader serves only three: on 16 May 2018, in fact, Anwar received a pardon from King Sultan Muhammad V.

The rest is recent history. Back in politics, in September 2020 Anwar tries again to take the lead of the government but once again finds his old mentor Mahathir, who returned to prime minister two years earlier at the age of 92, blocking his way. The elections on Saturday, November 19, are the moment for revenge: the reformist bloc Pact of Hope (Pakatan Harapan, Ph) wins 82 seats in the national legislative assembly, imposing itself as the first political force in the country; Mahathir, now 97, remains out of parliament for the first time. However, the role of the king is decisive, Abdullah Sultan Ahmad Shah, which calls for the formation of a national unity executive which the nationalist Muhyiddin Yassin, leader of the National Alliance (Perikatan Nasional, Pn) refuses to join. Now Anwar will have the difficult task of leading the country in a particularly complex regional scenario, dominated by China's growing ambitions and the latter's rivalry with the United States, and at a time of economic slowdown, the third in the South - East Asia.

Eni, Euglena and Petronas evaluate the opportunity of a biorefinery in Malaysia

Malaysia: the National Front chooses to remain in opposition

Malaysia: premier node, the king postpones the deadline for submitting nominations to tomorrow

Malaysia: general elections without a winner, proposals for the government coalition by Monday

Blinken: "Iran has rejected the current proposal to return to the nuclear deal"

The hypothesis of the Israeli newspaper "Yedioth Ahronoth": the military site hit is used by Tehran to develop hypersonic missiles in collaboration with Russia

Palazzo Chigi on anarchist violence: "The state does not come to terms with those who threaten"

"Actions of violence will not intimidate institutions"

Meloni: "I'm optimistic that Italy will make it"

"The government is trying hard, will continue to try hard, with small necessary initiatives and with large fundamental scenarios, working on both levels with determination and dedication"

"We are not at war with Russia, we have nothing against the Russian people, and there will be no Italian tanks in Ukraine"

The attack was also commented by the spokesman of the Ukrainian Air Force, Yuriy Ignat: perhaps now the Iranians "will not help Russia to commit crimes"

Pope Francis: "In the Holy Land dialogue and peace should be sought"

Building regulations were lacking and could be exploited by developers in an unsafe way, admitted UK Housing Minister Michael Gove

Bonaccini: "I want a reformist Pd, which puts work at the center again"

The candidate for the dem secretariat speaks during the programmatic convention in Milan: "As an opposition, we will say all the nos that are needed"